An Evolution from Adaptive Predictive Control to ADEX

This is a brief overview of the ADEX history, from it’s origins to the technology’s current state.

In september of 1974 the principles of the Adaptive Predictive Control methodology were first introduced in Juan Martín Sánchez doctoral thesis at the Polytechnic University of Catalonia.

Thanks a two year fellowship awarded by the Juan March Foundation of Spain, Dr. Martín Sánchez was able to develop an adaptive predictive autopilot for the F-8 Digital-Fly-by-Wire at the Charles Stark Draper Laboratory, formally the MIT Instrumentation Laboratory, in 1975. The outstanding results of the high fidelity simulation were formally communicated by the Draper Laboratory, in a letter written to the Juan March Foundation.

A Continuation-In-Part (C.I.P.) of the original patent filled in 1980 introduced the concept of integrating a prediction horizon into the Adaptive Predictive solution. This CIP patent was accepted and published by national patent offices worldwide.

NSERC granted a 5-year research fellowship award to Dr. Martín Sánchez in 1981 and later on an additional strategic grant award which also provided important financial support for the development of industrial applications of Adaptive Predictive Control. One important application was developed at CANFOR’s Port Mellon, British Columbia (Canada) pulp and paper plant, in collaboration with the Pulp and Paper Research Institute of Canada (PAPRICAN), and the University of British Columbia. The results were also confirmed in a formal letter written by the Dean of Engineering, at the University of Alberta. 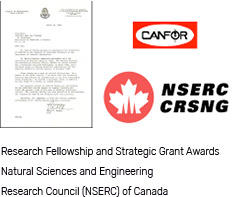 Dr. Martín Sánchez, by special invitation, presents a plenary session at IEEE Conference on Control Applications in Vancouver, Canada. The plenary session titled “Adaptive Predictive Control: From the Concepts to the Optimization of Industrial Plants” presented real applications for industries such as cement and energy..

Patent for ADEX filed with World Intellectual Property Organization (WIPO), and ADEX, S.L. is established as the company that will commercialize the technology.

Accepted in 2001 by the World Intellectual Property Organization (WIPO), ADEX obtains international patent protection, including the U.S.A. and Europe. The ADEX methodology was introduced to integrate Adaptive Predictive Control and Expert Control, allowing for the use of available process knowledge within the controller. As such, ADEX represents a new generation of Adaptive Predictive Control oriented towards industrial application which improves the robustness, efficiency and reliability of previous Advance Process controllers.

The third book on Adaptive Predictive Control is published, and presents the new generation of the methodology, named Adaptive Predictive Expert Control (ADEX). New training courses, design to teach industrial engineers and process control professionals how to apply ADEX in their own operating environments, are based on the book.

Thanks to an injection of 580.000 € of capital from both private investors and under the auspices of CDTI’s NEOTEC Project, ADEX, S.L. is able to move into new facilities and increase headcount. 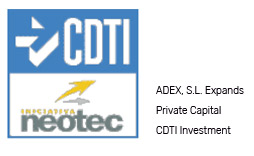 ADEX, S.L. wins the award for Best Technological Idea and Business Plan from Madri+d, a research and technology network intended to improve the competitiveness of businesses operating in the Community of Madrid, by facilitating the transfer of technological know-how. New ADEX Systems continue to be developed and applied to a wide variety of industries.

ADEX, S.L. continues expanding both nationally and internationally. In petrochemical, ADEX successfully optimized the control of 5 sulfur recovery units in the Cadereyta refinery of PEMEX Refinación, Nuevo León in Mexico with more than 80% improvement in performance. In the environment area, between 15 and 23% energy savings were achieved together with a significant improvement in treated water quality in the biological purification process of the prestigious new wastewater plant in La Gavia, Madrid.

ADEX, S.L. has carried out project for Scottish Power’s coal fired power station at Cockenzie consisting in the optimization of superheated steam temperatures. Also, ADEX has participated in two European FP7 projects, Flexiburn, for the development of “clean coal” power plant technology with carbon capture and storage (CCS), and the Central Design Team (CDT), to design the first transmutation reactor for the nuclear industry. Likewise, it has been initiated the project entitled “Adaptive Flight Control System for ATLANTE” with the collaboration of EADS and GMV, and participates in the project called SINTONIA, aimed at developing advanced systems for unmanned aircraft, led by Boeing. In 2009, the President of ADEX was appointed Fellow of the IEEE for his “contributions to adaptive predictive control methodologies”. 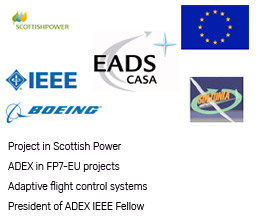 During 2010, ADEX S.L. has participated in a belonging programme to the European 7th framework called the MYRRHA Accelerator eXperiment research (MAX) with the collaboration of SCK·CEN (Studiecentrum voor Kernenergie) and CNRS (Centre National de la Recherche Scientific). Moreover, ADEX S.L. has carried out a project for Scottish Power´s Daldowie wastewater plant at Glasgow controlling the levels of dissolved oxygen in the tanks. Also, it has been initiated the application of ADEX optimized Control to the chocolate tempering process in the Alicante factory of Chocolates Valor. Finally, the IEEE of India invited the President of ADEX to deliver a cycle of seminars on Optimized Adaptive Control and Industrial Applications. 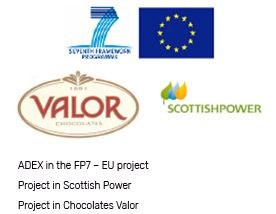 In 2011 ADEX S.L. has carried out a project for Bahía Bizkaia Electricidad´s combined cycle power station at Bilbao consisting in the optimization of superheated steam temperatures. Moreover, ADEX has been contracted by “Financiera y Minera” of the Italcementi Group to install and maintain an Optimized Control System for the grate coolers and the cement klin calcinator. Likewise, Portland Valderrivas group, also from the cement industry, has required ADEX´s services to optimize the control performance of cement mills at their Uniland factory. Finally, in order to respond the demand from clients for a robust, heavy industrial solution working at PLC level, in cases where the PC environment is not appropriate, ADEX has developed a hardware module which executes the ADEX controller, this is called ADEX Controller Module or ACM. 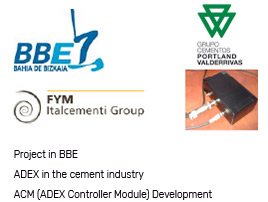 During 2012, an adaptive self-tuning flight control system (AST-FCS) designed by ADEX for the ATLANTE UAS has been successfully validated using the simulation developed by the Flight Dynamics & Control Laws Department of Airbus Military. EADS has certified the excellent results obtained by the AST FCS highlighting their ability to deal with uncertainties. Also, International Composites, S.A. (ICSA) has reduced production cycle and increased quality in aerospace parts fabricated under ADEX control in their Toledo plant. Additionally, a Special Edition for Industrial Optimised Adaptive Control of the Int. J. of Adaptive Control and Signal Processing edited by Juan M. Martín Sánchez was published in October. It presents the “state of the art” in adaptive control and includes ADEX applications in various industrial areas. 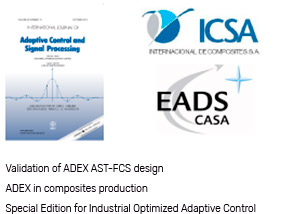 In 2013, an ADEX optimized adaptive control system was applied in the 28 MW Sangüesa biomass plant, one of the largest in Spain. More than 1% increase in generated net energy was achieved under a significantly more stable operation by the ADEX system. Acciona Energy certified the excellence of the results. ENDESA and ADEX signed the Optical project. It represents a collaboration agreement between both companies for the use of ADEX systems in the thermal and nuclear plants of ENDESA and ENEL; particularly, it contemplates the optimized adaptive control of steam temperatures. ABB DCS integrated ADEX optimization system for their application in the PEMEX refinery of Cadereyta (Nuevo León, Mexico).

In 2015 the book “ADEX Optimized Adaptive Controllers and Systems” was published by Springer and authored by J.M. Martín –Sánchez and J. Rodellar. This book is a compendium of the R+D+i and Industrial applications carried out by ADEX SL directors and engineers. Also long term collaboration agreements were signed with the multinational ENEL for the optimization of their plant in the energy area, including coal-fired power plants, combined cycles, hydraulic and diesel plants. Another long term collaboration agreement was signed with HPD Veolia for evaporation, concentration and crystallization plants. Likewise ADEX participated in two H2020 outstanding projects. It was awarded phase 1 of the H2020 AST-FCS Project, whose objective is the development and commercialization of the first adaptive self-tuning Flight control system in aeronautics, and it became a member of the consortium to develop the “MYRRHA Research and Transmutation Endeavour (MYRTE)” Project. 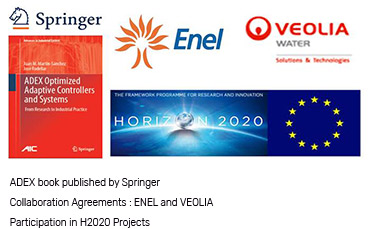 In 2019, ADEX launched ADEX Energy, its US subsidiary in Cambridge, Massachusetts, to address the promising American Market.

We started with a first customer and the support of DoE, which helped us in the early stages of the company. 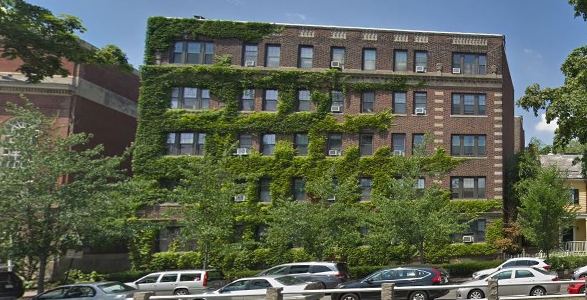